Holiday, a rainy day, some enameled copper wire and here we go in another experiment with small loop antennas.

The famous RGP3, developed by Rene Passold based in an old project called “bazooka antenna”, is spread over MW dxers in Brazil, and still represents opportunities for testing several configurations, specially related to the coil. 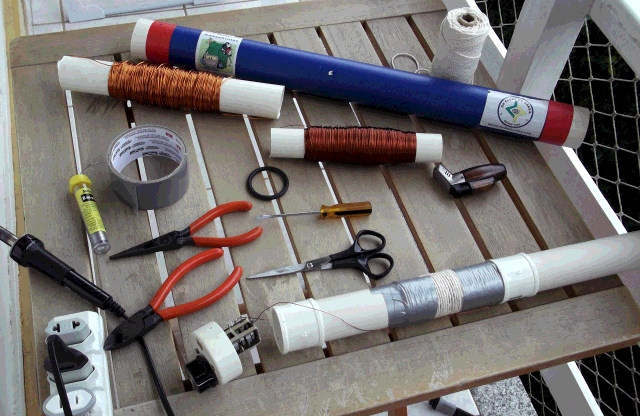 In this experience, I checked two forms of winding the coil, with turns together and spaced by a constant distance using a common string.

And the results confirm that spacing the turns makes the tuning range wider, due to less capacitance losses. Both performance are similar, not noticed using a standard receiver like a Grundig YB400, that shows a small but reliable s-meter (not professional but adequate to fine tuning small loops).

The format of ferrite rod were kept the same as the original RGP3, but this one I got glued two sets of ferrite to check with sensibility would be better. Practical experience shows no sensible improvement doubling the number of ferrite rods aligned in the axis.

But its nulling capacity seams to be a little bit better.

Instead of using Litz Wire that requires some time and tricks to get good soldering, I adopted enameled copper wire due its rigid construction and overall quality showed for the small loops.